An Insight into Siamese Cats

The Siamese cats, which have been parts of royal households, are a colorful and glamorous cat breed whose true origin is from Thailand. Being a well known cat breed, the Siamese cats have been believed to have protected royal houses and shrines from bad spirits in the past, and have also been regarded to have bought good luck to their masters.

It was in the year 1884 that these cats made way towards England, and initially served as presents for the British Generals. With time, they gained popularity and finally made their way to America, and at present are amongst the most popular of the breeds of cats there. The Siamese cats, albeit, are the most recognized cats with shorts hairs, and hold their place in the top three in all of the cat breeds.

Although, these cats can be found in a variety of colors, there are a few factors which determine the genuine Siamese cats. This breed of cats is always recognized for their body types with light colors and dark shades overall, which are normally present around the lower half of the body like the legs, feet or tails. This breed of cats weighs between 6 lbs to 16 lbs and their originality can also be determined by their eyes which are bright and slanted.

In general, this breed of cats is a healthy breed with a round head and muscular built. They are well recognized across the globe for their colors and unmatched personality. Normally the cats are regarded as a quiet pet, but the Siamese cats are not like their co-breeds and are playful and noisy. You might not considering keeping a Siamese cat if you need a quiet companion, as this breed is the most social breed of cats.

Siamese cats are quite dependant on their masters as they require a lot of importance and believe that they are the most important part of the household and the whole world revolves around them; hence, they become dependant on their masters and expect a lot of care and importance. Unlike other cat breeds, the Siamese cats are quite playful and demand a lot of attention and interaction. They don’t like to be left alone and hate it if you do.
Read also: Australian Mist Cat Breed Information
Though these cats may require a lot of emotional attention, they are not very difficult to maintain. If your choice is cats with less maintenance, Siamese cats are the best option, as they do not require a lot of grooming and can be bathed and brushed at your convenience. A couple of times in a month or so are sufficient. As the Siamese cats are short haired, you just have to brush them gently. This cat breed tends to fall sick but that is with any other breed too.

This breed of cats like any other cat breeds has a living period of approximately 15 to 20 years. All you have to ensure is that the cats are properly and regularly fed, and receive timely medical attention, and they will be your companions for years to come. Most cat owners who have Siamese cats as pets report that they are more like a family member and a kid to them than a cat.

Siamese cats are no doubts great as pets anyways we want. Though this cat breed demands a lot of attention, they are great as long time companions. Also your kids will enjoy with them because of their playful attitude and because they are generally free to spend time with the cats. So if you can provide this breed with the required attention, you will have long term companions till their existence.

If you want cats to talk to you all day, Siamese may be best for you. The Siamese cat is one of the best and most famous cat breeds. The Siamese cat is smart and curious  and has a distinctive coat with black dots on a light background. It weighs between 6 and 10 pounds.

Playtime is also essential for Siamese, so if you plan to take one of your cats home, take advantage of active toys that can help you train your kittens. This will keep your cat healthy and allow you to spend quality time, thus strengthening your connection.

In Thailand, cats with light coats, black masks, ears, paws and tails have been known for hundreds of years. Ancient manuscripts represent cats, but they were not seen in the West until they were exhibited at the Crystal Palace Cat Show in London at the end of the 19th century. Not everyone appreciates their unusual appearance, but they quickly become fashionable pets.

They were also popular in the United States at the beginning of the century. President Rutherford B. Hayes and his wife Lucy were given to them in 1878 by David B. Sickels, an American diplomat in the Thai consulate. The recipient of the Siamese cat. A letter detailing the gift from Sickels was submitted at the Rutherford B. Hayes Presidential Center in Fremont, Ohio.

Initially, only cats with sealed dots were shown, dark brownish black, but blue, chocolate, and lilac siamese soon appeared and were accepted by the show circle. Today, the Siamese have many dots of different colors and styles, including tabby and smoke spots.

The Siamese itself is a natural breed, which means that its original pointed pattern was the result of a genetic mutation. This breed has contributed to the establishment of many other races, including Orientals, Balinese, Tonkinés, Persian Himalayas, and Havana.

Siamese is recognized by all cat associations. The International Feline Association also recognizes Thais, who is described as primitive cats of Thai natives. In Thailand, cats are called Wichienmaat. Some people call him an ancient Siamese. It has the pointed fur and dominant character of a Siamese dog, but its body is more gentle.

The most important thing you should probably know about these cats is that they are talkative and stubborn. They will tell you their thoughts loudly and hoarsely, and they want you to pay attention and act on their suggestions. Siamese cats like their people very much. They like to be "helpful" and will follow and supervise each of their actions. When sitting, the Siamese will lie on your lap, and he will lie on the bed with you at night, possibly under the sheets, with his head on the pillow.

Read also: American Wirehair Cat Breed Information
If talking with nosy is driving you crazy, don't be Siamese. On the other hand, if you like to find someone to chat with, Siamese may be your best friends. Just make sure you have time to spend with this demanding social cat. Siamese don't like being alone for long periods of time, if you work during the day, it would be smart to have two people so they can stay with you.

If you want to spend time interacting with cats, choose Siamese cats. This is a loyal and caring feline, and if he receives little or no attention, he will pout. However, in the right house, it can flourish. 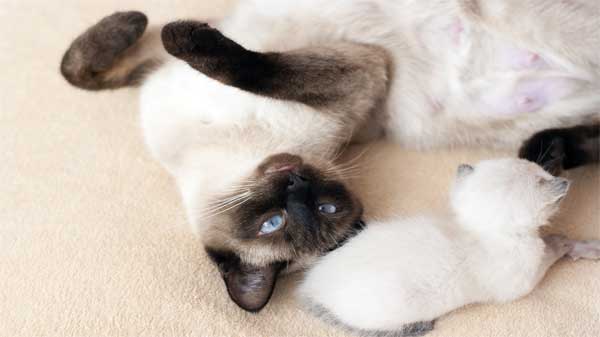 The short, thin Siamese coat is easy to care for, and it can be dispensed once a week to remove dead hair and emit skin oil. Brush your teeth to prevent periodontal disease. Daily dental hygiene is better, but brushing your teeth every week is better than nothing.

It's best to keep the Siamese indoors to protect it from other cat-borne diseases, dog or coyote attacks, and other dangers facing cats outdoors, such as being hit by a car. Siamese who go outdoors are also at risk of being robbed by someone who wants to have such a beautiful cat without paying.

Both pedigree cats and mixed breed cats are likely to have hereditary problems. Issues that may affect Siamese include:
1- Asthma/bronchial disease.
2- Amyloidosis, a disease that occurs when a type of protein called amyloid is deposited in body organs, primarily the liver in Siamese.
3- Congenital heart defects such as aortic stenosis.

The wedge-shaped head is long and gradually narrows from the narrow tip of the nose to the tip of the ear, forming a triangle. The unusually large ears are wide at the roots and point to the tip so that they have the same triangular shape as the head.

The almond-shaped middle eye is always strongly intense blue. The body is usually described as tubular and is supported by long, slender legs with the rear legs higher than the front legs. The siamese walks on its small, oval calf, waving its slender tail, narrowing thinly.

Siamese has a short coat with a good texture and soft texture, comes in four colors: the seal point, pale shading of the body cream with brown dots, dark brown leather and claw pads; It has frosty gray dots and pink lavender skin.

The color range allowed by the International Feline Association is beyond the four-point color recognized by the CFA. They include tiger spots, red spots, milky spots, silver tiger spots, smoke spots and scattered spots.

The TICA breed standard requires it to have a modified wedge-shaped head with medium width and round cheeks, while the nose narrows towards the rounded end, just like a conical garden shovel. The head is longer than wide, but it has not reached its limit.

The eyes have an almond shape, the ears are medium to slightly large, the long, slim body is moderately long, but not tubular, the tail as long as the torso, tapered at the edge, the mid-length legs graceful and supported by medium oval feet, short and silky coat with pale body color, white Pale and dense colors, even point.

Siamese with children and pets

Siamese is a social and active cat that is ideal for families with children and cat-friendly dogs. He will play fetch, learn tricks easily and love the attention he receives from children who treat him with respect. For more details and information about Siamese Cat Breed, click here.